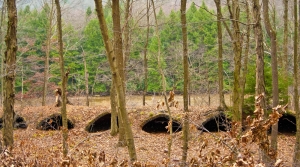 Redbank Valley Trails Association (RVTA) was officially organized by volunteers on May 17, 2010.  The corridor was rail banked and acquired in June 2010 by the Allegheny Valley Land Trust (AVLT). Rail banking is done under a federal statute which preserves the corridor for possible return of the railroad, subjects it to certain railroad requirements and allows interim trail use. RVTA is working with AVLT to improve the corridor for interim trail use until such time as the corridor is conveyed to RVTA which is now in progress.

A Feasibility Study was completed in June 2011 on the main 41.5 mile trail funded by a grant from the Northwest Regional Planning Commission and sponsored by New Bethlehem Borough.  RVTA Trail Feasibility Report 06242011

The first goals of the organization were to clean litter, clear brush, open drainage, and begin establishing the long term plan of developing the trail. Since that time, RVTA and a group of dedicated volunteers have made truly record progress.  In 9 years, all of the main trail was graded and rolled to compact the ballast stone, all of it has been surfaced with crushed limestone for a smooth surface, parking areas have been established, and all of the bridges on the main trail have been decked and railed with most work done by volunteers.  Work was completed in August 2019 on surfacing of the entire 9-mile Sligo Spur which connects to the main trail at Lawsonham (mile 6) through to Walker Farm Road a mile south of Sligo.  A major washout was repaired within the first mile, 3 bridges have been decked and railed and all that remains is some parking area improvements and installation of gates to keep motorized traffic off the spur for the safety of trail users.

Our major hurdles were 2 of the 3 tunnels (Brookville and Climax) that needed drainage and roof work before the 2 tunnels could be opened.  The Climax Tunnel at mile 17 was our highest priority because of its location near the middle of the trail. Phase 1 repaired a roof fall near the western portal.  Phases 2, 3 and 4 added tunnel liners in from each portal to support the 4-course spring arch brick lined ceiling and a buttress was added to the western portal with funding from DCNR and TAP/TE funding.  Additional support and guniting was done in late 2017, in early 2018 an 80 foot extension from the eastern portal was added and the tunnel was completed in August 2018 and is now open.  There are no current plans to improve the longer Brookville Tunnel at the current end of the trail since access is available via the Depot Street Spur.

Our hard working volunteers will continue to work on adding crushed limestone to graded and compacted sections of the improved trail, more parking and planning for rest room areas, way-finding signage, creek access and historic markers along the trails. Volunteers continue to work on the major task of maintaining drainage, removing fallen trees, vegetation control and maintaining the trail surface.  Our goal was to fully open the trail for non-motorized use by bicyclists, hikers, walkers, cross country skiers, and others who enjoy the beautiful unspoiled scenery. Our goal remains to keep the trail open. 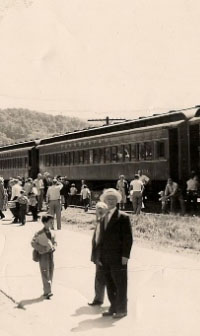 Train passengers at Alcola Park in the 1950’s