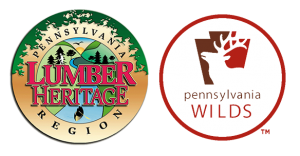 History of the Rail Corridor

August 2019 marked completion of all surfacing on the main trail and the Sligo Spur.  Unfortunately, celebrating that accomplishment will be delayed because of the July 19, 2019 flash flood that destroyed the 1871 stone arch over  Long Run at mile 19.  It created a 39 foot gap in the trail with steep terrain on either side that will have to be repaired at a great expense still to be determined.

The last train ran on the corridor through New Bethlehem on November 5, 2007, as it pulled up tracks and ties, and shortly thereafter completed the last journey through to Brookville.  Use of the Sligo Spur had been discontinued earlier. The corridor was purchased by the Allegheny Valley Land Trust from the Pittsburg & Shawmut Railroad, LLC, Buffalo and Pittsburgh Railroad, Inc. and Shannon Transport Inc. in June 2010.

The corridor was known most recently as the Mountain Laurel Railroad low grade corridor.  The corridor was originally developed by the Allegheny Valley Rail Road to connect to Driftwood.  Grading began in 1872 and was completed in March 1873.  According to the 1887 A.J. Davis History of Clarion County, the Sligo Branch, at first called the Clarion County Railroad, was built in 1873-1874, to reach the rich ore beds in the vicinity of Rimersburg and Sligo.  For more history visit www.shawmutline.com.

The low grade main line was built to service the many oil wells, coal mines, lumber and other industries in the area as well as passenger trains to and from Pittsburgh and other cities.  Remnants of some of those industries remain along the corridor, including the St. Charles Brick plant, coke ovens near New Bethlehem, and the chimney of the Hawthorn Pottery Company at the United Valley Soccer Fields in Hawthorn.  RVTA has installed some and hopes to install more historic markers at these locations and where rail stations, tipples and other points of historic interest existed.